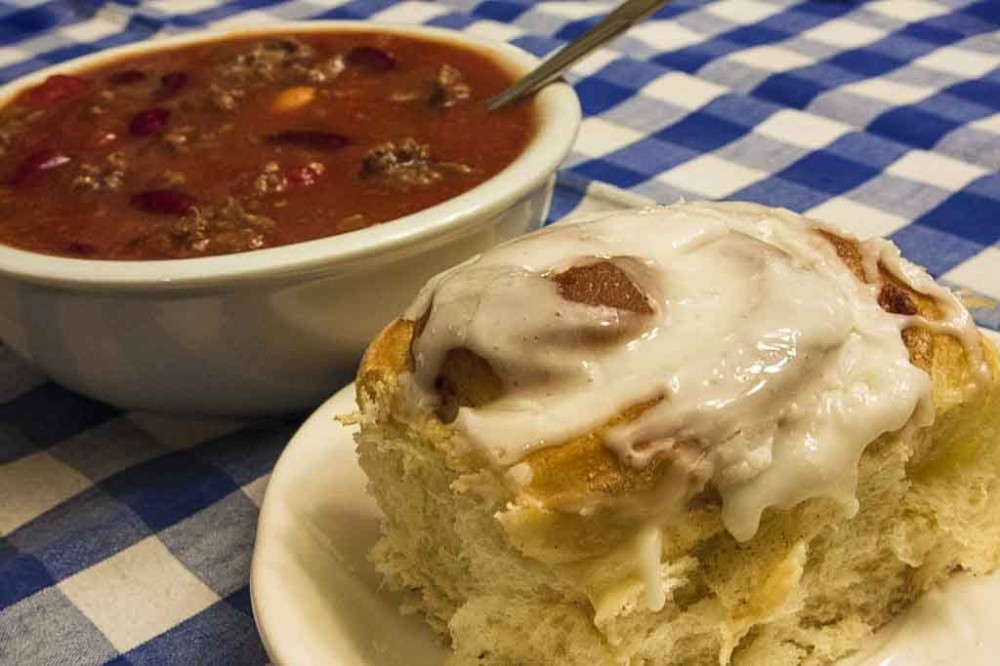 What goes with chili? Cinnamon rolls, of course. No one knows exactly where the splendid idea of eating cinnamon rolls with chili began, but it has become an obsession for generations of school kids across Iowa.

There are variations of this classic combination. In the Lake City School District, for example, the talented school cooks (including many farm wives who were expert home cooks) started early in the morning on chili day to make their fabulous homemade caramel rolls. This feat of culinary perfection is unforgettable for anyone who attended school in Lake City from the 1960s through the early 1990s.


The sweet, spicy aroma emanating from the kitchen by mid-morning was enough to have every stomach growling. My classmates and I can still taste the pure bliss bursting forth from each bite of sweet, golden caramel that enveloped soft, twisted folds of dough slathered with creamy butter and cinnamon.

Other schools in Iowa served cinnamon rolls with white frosting rather than caramel rolls on chili day. Still other school districts served peanut-butter sandwiches on chili day. While a few unfortunate souls who grew up in Iowa claim they never experienced chili and cinnamon rolls for school lunch, it’s a beloved tradition that continues to delight countless young Iowans in school districts across the state.

Consider Cincinnati chili
While the chili-and-cinnamon-roll phenomenon seems to be a distinctly Iowa thing, a few other Midwestern states lay claim to it, as well, including Nebraska and Kansas. Not all Midwesterners have been initiated into the joys of chili and cinnamon rolls, however. When I described this magical combination to a friend who grew up in Minnesota, she recoiled in horror and exclaimed, “That combination makes no sense. It’s like serving scrambled eggs with birthday cake!”

Before you turn your nose up in disgust at this seemingly odd food pairing, let’s take a little side trip to Cincinnati, Ohio, one of the most chili-crazed cities in the United States. In a lot of ways, Iowa’s chili-and-cinnamon-roll combination is reminiscent of Cincinnati-style chili. Cincinnati chili is quite different from its more familiar Texas cousin and has developed a cult-like popularity. Not only does it have a thinner consistency, but it’s prepared with an unusual blend of spices, including cinnamon.

This brings us back to Iowa. Want to sample authentic Iowa-style chili and cinnamon rolls? It’s not just for school lunch anymore. In Sioux Center, Casey’s Bakery (not the ubiquitous convenience-store chain but a locally-owned business open since 1946), promotes its “Chili Bash,” which is served on Thursdays in the winter months. Guests enjoy all-you-can-eat chili served with cinnamon rolls, of course, and a drink.

Then there’s Meal Combo #11 at the Runza® chain of fast-food restaurants (with locations in Council Bluffs and Clarinda) featuring Runza’s homemade chili with cinnamon rolls. Nebraska-based Runza knows this might be a bit shocking for the uninitiated. “If you tell someone who’s not from the Midwest that you like chili and cinnamon rolls together, they’ll look at you like you have three heads,” says the company’s online promotion for Meal Combo #11. “But if you let them try Runza’s® homemade Chili with Miller & Paine® Cinnamon Rolls, they’ll still look at you like you have three heads, but they’ll also be like, ‘Hey guy, you were right, this is fantastic.’”

Perhaps the real issue here is this: can we get away with eating dessert with our meal? Better yet, can we fulfill our fantasies of eating the dessert first? You bet, especially since the chili-and-cinnamon-roll sensation continues in school-lunch programs across the state in both public and private schools. Take Kuemper Catholic Schools in the western Iowa town of Carroll, where homemade chili and cinnamon rolls have remained a staple of hot-lunch offerings through 40 years of handwritten recipe books.

In a February 2015 feature story from the Carroll Daily Times Herald newspaper, food-service director Lynne Humphrey said she suspects the unusual meal combination started because the government sent the schools tons of flour, beans and tomatoes. The cooks at Kuemper Catholic School system still make homemade cinnamon rolls on the grand scale. Their recipe includes 50 pounds of flour, 4½ cups of yeast, 18 cups of dry milk, 10 cups of sugar, 8½ cups of oil and 11 quarts of water, according to the news article.

The marvelous meal is served about once a month. The article reported that Humphrey’s staff made 487 made-from-scratch, hand-frosted rolls and 35 gallons of chili in the high school kitchen for a recent chili-and-cinnamon-rolls day. While the kids may be picky when it comes to the chili, with some taking the time to extract the beans or tomatoes, they have no trouble eating all the cinnamon rolls. These kids are learning what generations of Iowans already know. The only proper way to eat chili is with cinnamon rolls.

The secret to exception cinnamon rolls (or caramel rolls--oh yeah!)
While it seems like everyone has their own recipe for chili, many of the award-winning entries in chili cook-offs across Iowa including a hint of sweetness from brown sugar, grape jelly or other secret ingredients. The best cinnamon rolls, however, tend to revolve around one secret ingredient—mashed potatoes. The potatoes don’t change the flavor but help keep the rolls moist.

Just ask Jerry Schleisman of Lake City, a farmer and cinnamon roll baker extraordinaire. Actually, he usually makes caramel rolls from his mother’s cinnamon roll recipe, just like she used to make on chili-and-cinnamon-roll day at the local high school.

Jerry learned from the best. His late mother, Loraine (Schroeder) Schleisman, spent a lifetime refining her culinary skills. She grew up on a farm near Carroll and began cooking at a young age. After she and her husband, Earl, started a family and settled in the Lake City area in the early 1940s, she cooked for their nine children. After Earl passed away, Loraine began cooking at the high school in Lake City and thoroughly enjoyed her job.

She and her fellow cooks would start early in the morning to bake the luscious, gooey caramel rolls that delighted generations of students. Loraine kept cooking long after she retired from the school. She sold homemade baked goods to people in the area and sometimes prepared up to 24 dozen rolls a day. “It wasn’t uncommon for Mom to get up at 2 or 3 a.m. to start the next batch of rolls,” Jerry told me during a recent visit at his home.

I’m grateful Jerry is keeping this baking tradition alive. In addition to baking for his family and friends (when he’s not busy farming, of course), Jerry prepares many of his mother’s best recipes for the God’s Harvest Sale, which is held at St. Mary’s Catholic Church the first Saturday each December. It’s no wonder why the famous Schleisman caramel rolls often bring $250 to $300 per dozen at the auction. Here’s the recipe that Jerry and his mother have relied on for years. 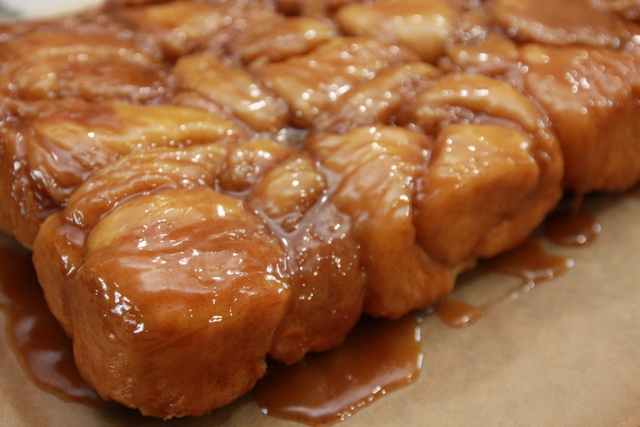 Preheat oven to 375 degrees. Peel about three small potatoes, and cut into cubes. (Schleisman prefers Yukon Gold because of their flavor and texture). Put potatoes into a stock pot, and cover with enough water to reserve 4 cups of potato water after the potatoes have cooked. Bring to a boil, and cook potatoes until they are soft enough to mash. While the potatoes are cooking, sift the flour.

Dissolve yeast in warm potato water. Add 1 cup sugar, and stir to combine. When dissolved, add remaining sugar, vegetable oil, eggs, salt and mashed potatoes to the yeast mixture. (Make sure eggs are at room temperature. If they just came out of the refrigerator, crack them into a bowl, whisk them and warm them in the microwave oven for 20 seconds.) Then add flour, about 2 to 3 cups at a time.

Knead the mixture until it forms a soft, smooth dough. (Jerry Schleisman kneads the dough by hand for about 10 minutes). Transfer dough to a large, greased bowl. Allow dough to rise for about 1 hour, until it doubles in size. Punch dough down. Let dough rise again until doubled in size.

Place rolls in greased 9-inch by 13-inch baking pans. If the rolls will be caramel rolls, prepare the Cinnamon Roll Caramel Topping (see recipe below). Pour caramel topping over the cinnamon rolls. Bake at 375 degrees for approximately 35 minutes.

After rolls have been removed from the oven, place a sheet of waxed paper or parchment paper across the top of the pan. Carefully flip the paper and the rolls onto the countertop. Scrape remaining caramel topping from the pan onto the rolls. Allow rolls to cool. Makes 4 dozen cinnamon rolls.

This story will appear in Darcy Dougherty Maulsby's upcoming book, "A Culinary History of Iowa," which will be published in the summer of 2016 by The History Press. Click here for more details!