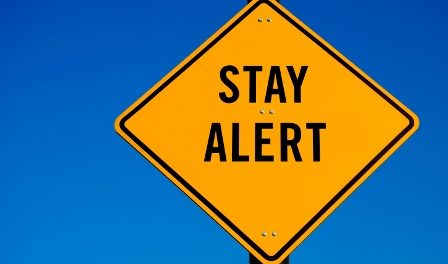 Always Alert-How to Stay Safe in Any Situation

What was that? None of us knew what was going on at first, and I was confused—and alarmed.

It happened on the bright, sunny morning of October 16, as hundreds of us were gathered at 9 a.m. in the ballroom of the downtown Marriott Hotel in Des Moines for the Iowa Hunger Summit. I thought this would just be another routine meeting to cover. Boy, was I wrong.

After opening remarks from Ambassador Kenneth Quinn, president of the World Food Prize Foundation, and Iowa Farm Bureau Federation President Craig Hill, five former U.S. Department of Agriculture secretaries (including Tom Vilsack, Ed Schafer, Mike Johanns, Ann Veneman, and Dan Glickman) stepped on stage for a panel discussion. (You can read my recap of the panel discussion in my article “Hungry for Answers” in Farm News.)

Suddenly there was a ruckus from the back of the ballroom. There were voices shouting, although I couldn’t make out the words at first. Everyone began looking around to see what was going on. Was this a surprise part of the program?

Suddenly a small group of young men holding a large white banner painted with red lettering marched down the aisle. It soon became evident they were chanting about “hell no GMOs” over and over. A slender young woman dashed after them, capturing the footage on her cell phone.

It also became clear this group intended to stand between the bewildered audience and row of former ag secretaries on stage, as the protestors belted out their angry chant. I don’t know exactly how long the group took over the Iowa Hunger Summit, but it seemed much longer than it probably was.

It appeared that most of the audience, myself included, froze in shock, desperately hoping someone would take control of the situation.

Finally, a tall gentleman dressed in a business suit demanded that the protestors leave, herding them at times towards the side exit doors, since the group showed no signs of leaving voluntarily. One protestor nearly knocked over Iowa Public Television’s camera near the side of the stage as he and his cohorts continued shouting.

The spectacle didn’t come to an end until the protestors turned to face the audience as they were escorted out of the side doors, bellowing, “Shame, shame, shame” all the way.

While I breathed a big sigh of relief as the Iowa Hunger Summit proceeded without incident, I couldn’t help but think about the mass shooting in Las Vegas just days before. I also started thinking how vulnerable all of us were in that ballroom, if the worst had happened.

What if the worst had happened?
I started researching personal safety and situational awareness and am now rethinking the way I view the world. In many ways, these safety tips boil down to the power of observation, a tool I use daily as a writer and encourage you to use, as well.

• Think ahead. A 2014 study from the Federal Bureau of Investigation (FBI) found that most active shooter events end in 2 minutes or less. This means you have little time to think if you’re caught in this situation. You’ve got to have a plan ahead of time, since you may only have seconds to act.

• Know your natural tendencies. When any sort of emergency arises, be it an active shooter or even a fire, the natural response for most people, surprisingly enough, is to not do anything. It’s human nature to freeze up in emergency situations. Another bias that keeps us from taking action is our natural tendency to follow the crowd. If we see that everyone else is locked up by inertia, we tend to act the same. Be aware of these forces, and prepare to counteract them.

• Visualize for safety. When you enter a public space, whether it’s a hotel meeting room, restaurant, airport, theater or other venue, take note of the exits. Also, put yourself in position so you can observe as much of your surroundings as possible. Try to sit with your back against the wall, for example, not the larger room where someone can come up behind you.

• Stay in “condition yellow.” This means you’re relaxed but always alert. Remaining aware of your surroundings will give you a head start if an emergency arises. Some safety experts call this ABO (Always Be Orienting). Don’t get so absorbed in your smartphone, for example, that you fail to pay attention to the world around you.

• Establish baselines and look for anomalies. Know what’s normal in a given situation. If something seems out of the ordinary, keep an eye on it.

• Play the “A” game. The “A” game, or awareness game, means you take note of details everywhere you go, from the gender, hair color and clothing of the person behind the counter at the convenience store to the number of exits you see in the theater. This game trains you to be mindful of your surroundings and can help you create a plan of action wherever you go.

• Call 911. If you find yourself in the midst of an emergency, get to safety as soon as possible, and then call 911. Don’t assume someone else already has.

It takes practice to truly pay attention to what’s going on around you, but this skill can a long ways in keeping you from appearing like an easy target. You want to get to the point where situational awareness is just part of your daily routine, much like looking both ways before you cross the street.

Don’t be paranoid, just mindful. Honing your powers of observation will pay big dividends and might even save your life.

Want more?
Thanks for stopping by.  I invite you to read more of my blog posts if you want more intriguing Iowa stories and history, along with Iowa food, recipes and tips to make you a better communicator.

Your message was sent succssfully!
Something went wrong, try refreshing and submitting the form again.
1
3
0