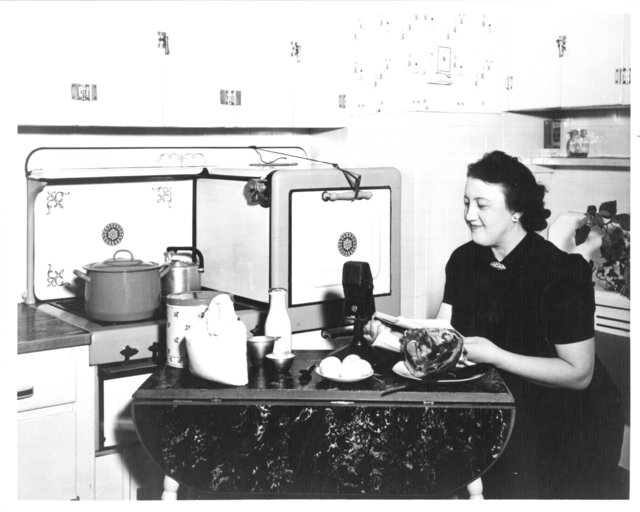 Long before there was Martha Stewart, there were KMA’s radio homemakers. These creative, talented ladies from southwest Iowa revolutionized women’s roles far beyond their humble farm kitchens starting in the 1920s. As they delighted Midwestern audiences by sharing their favorite recipes and providing down-home, daily visits with their radio friends, some of the women also became successful entrepreneurs along the way.

Their story begins in the early 1920s with the debut of a fabulous new invention called radio. In 1925, when a local businessman named Earl May began broadcasting KMA Radio-960 from Shenandoah, Iowa, to promote his seed and garden business. The station gained a following by airing practical information designed to help with the day-to-day life in Midwestern farm kitchens.

Before long, KMA was a trusted friend throughout the wide listening area, offering inspiration, companionship, and all manners of domestic counsel. The power of this connection can’t be understated when you consider the era—a time when farm wives were much more isolated than today due to poor roads, limited social opportunities and long days filled with endless chores.

A roster of personable, lively women who quickly became known as the KMA Radio Homemakers hosted KMA’s daily radio programs, including the Home Hour, the Stitch and Chat Club, and the KMA Party Line, while live cooking demonstrations drew thousands to the KMA auditorium in Shenandoah. 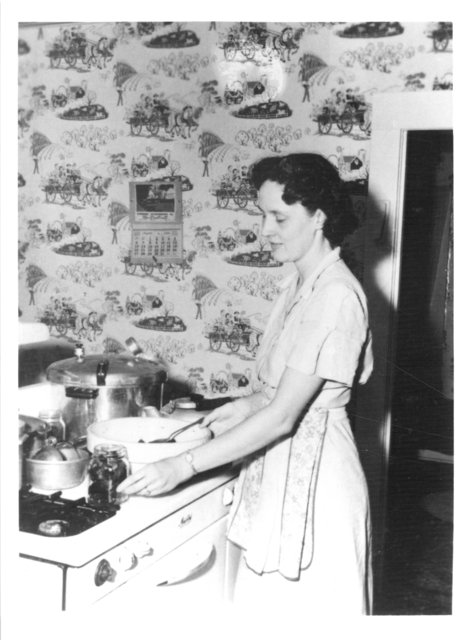 Evelyn Birkby was one of the beloved radio homemakers from southwest Iowa.

Broadcasts reached across the Midwest
The radio homemakers’ history is also linked to Earl May’s local competitor, Henry Field, another nursery and garden entrepreneur who seized on the power of radio to help expand his business. Field recruited family members to go on the air, including his sister, Leanna Field Driftmier, who began broadcasting “The Mother’s Hour,” which became “Kitchen Klatter.” Without any training, Leanna sat down at the microphone and just started talking about her home, family, recipes, household tips, advice for child- rearing and whatever news seemed worth sharing during the afternoon show.

In 1930, Leanna broke her back in a car accident but wanted to continue her show, despite her injuries. The radio equipment was brought to her home, and she broadcast from her bed and later from her kitchen table. The show became so popular amongst listeners that it was eventually was broadcast in six Midwestern states.
Neighboring on the air

As the radio homemakers’ concept gained momentum, local farm women like Evelyn Birkby began broadcasting from their kitchens in the 1950s. In her show “Down a Country Lane” on KMA Radio, Birkby would discuss her family and share snippets from her daily life, as well as offer suggestions for making the home a more pleasant place to live. Birkby called this phenomenon “neighboring on the air,” and it met a vital need when farm life could often be isolating.

Through the years, a line of Kitchen Klatter products (including food flavorings, bleach and more) was developed and sold over the radio by broadcasters like Leanna Driftmier. In addition, a monthly Kitchen Klatter magazine was circulated to thousands of Midwestern readers who enjoyed the articles, letters and recipes like Company Ham and Potatoes, Emerald Mint Sauce (made from Kitchen Klatter Mint Flavoring), Mary’s Pineapple Pie and Grandma’s Oatmeal Cookies. The Kitchen Klatter enterprise and the radio homemakers endured for a number of years, with some of the broadcasts lasting until the 1990s. 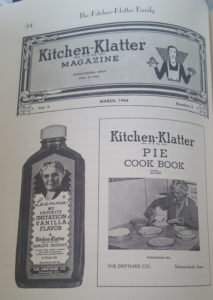 Recipes preserve a taste of Iowa history
In 1991, Evelyn Birkby published the fascinating book “Neighboring on the Air,” where you can almost hear the voices of the KMA homemakers while you get a taste of their philosophy of life and sample their recipes. You can learn how to make hearty Midwestern fare ranging from Sour Cream Apple Pie from Florence Falk, “The Farmer’s Wife,” to Six-Layer Washday Dinner from Doris Murphy, who took to the air in 1949 with her “Party Line” broadcast.

You’ll get a sense what a grueling schedule the radio homemakers often endured as they broadcast radio shows out of their kitchen while their own family life went on about them. These ladies also knew the needs and interests of their audience, because they, too, were well acquainted with hard work, hard times and making do.

Through it all, the radio homemakers were Martha Stewart and Dear Abby all rolled into one as they shared news about their children, home beautification tips and their trusted recipes. Thousands of devoted listeners depended on them for weekly entertainment, information, humor and continuity. These listeners considered the radio homemakers a valued part of their lives, which is reflected in the longevity of the radio shows. The radio homemakers’ remarkable contributions are an enduring legacy to power of Iowa farm women and add unforgettable flavor to Iowa’s rich culinary heritage.

Six-Layer Washday Dinner
Like today’s busy working women, Iowa’s radio homemakers like Doris Murphy knew the value of being able to put a hearty, nutritious meal on the table without a lot of fuss. No doubt her recipe featured home-grown and home-canned vegetables.

Your message was sent succssfully!
Something went wrong, try refreshing and submitting the form again.
6
4
1