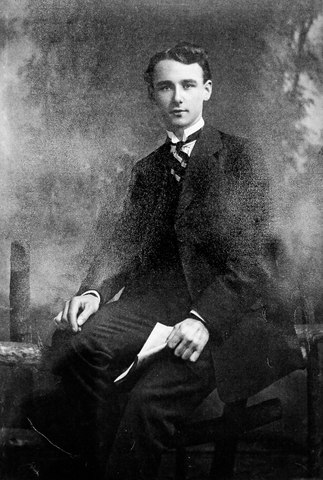 Independence, Iowa’s Connection to the Titanic and Carpathia

It’s amazing how many Iowans have ties to the Titanic, even all these years after the great ship sank. During a program at the Independence Public Library in June 2019, a lady named Ann Gitsch from Independence approached me following the program. As soon as she mentioned she had a relative on the Carpathia who helped rescue Titanic survivors, she had my total attention.

As Gitsch told me about Purvis, she handed me a copy of an unnamed publication with an article titled “Alnwick Schoolboy’s Experience.” (Alnwick is a town in Northumberland, England.)
The following article was taken from a 1912 letter Purvis wrote to his parents, including Mr. R. Purvis of Battery Hostel, Alnmouth, in northern England, following the Titanic disaster. The news article promised to be “of special interest to those were his [Purvis’s] schoolmates at the Duke’s School:” 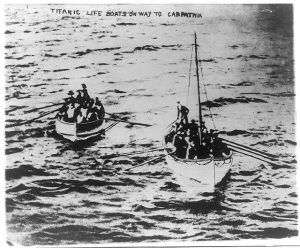 Survivors from the Titanic row towards the Carpathia

We have reached Gibraltar at last after the most eventful voyage I have ever experienced. I suppose you have seen the papers about the Carpathia getting the Marconi message which was sent from the Titanic before she went down. The captain got the message at 12:15. All the crew were in bed, so he sent down the chief steward to call all the stewards and stewardesses. At first the men would not get up. They thought it was just some boat drill they were wanted for, but they got up quick enough when they heard exactly what had happened—that the Titanic was sinking, and that the Carpathia had turned around and was going as hard as she could to assist her.

We got all together in the dining saloon, and the chief steward told us exactly what to do. Some were sent to carry blankets, other to lay up tables and make coffee, and some to man the boats in case they should be lowered.

I have an oar in Number 12 boat. We had the ship ready to receive 2,800 passengers by half past two. We got the first boat [from the Titanic] at 4 in the morning full of women and children. There were all nearly mad with cold. There was only two men in the boat—one a sailor who had gone mad. We hauled them all up the ship’s side with ropes tied around them and the children in canvas bags. We picked the last boat up at ? o’clock [newsprint here was illegible] and took altogether 780 persons safely on board. [Purvis’ count wasn’t quite accurate. Later accounts reported that Carpathia rescued 705 survivors from the Titanic, and rescue efforts were completed by 8:30 a.m. on Monday, April 15, 1912.]

We took eight dead bodies out of the boat and buried them at sea. We did not take any dead bodies into New York.

We came quite close to the iceberg which the Titanic struck. It was about a mile long and 100 feet high. There were plenty of bergs scattered about, but none so big as this one. We had to come right through amongst them in the dark looking for lifeboats. We sailed exactly over the spot where the Titanic went down, just a dark patch on the water with deck chairs and cushions and dead bodies (some babies) all floating about amongst the wreckage. It was a heart-rending sight.

When we got to New York, we had about 200 boats down to meet us, two American battleships amongst them. Men were down taking moving pictures of the ship docking, and of the Titanic’s passengers leaving her [the Carpathia]. Several of the passengers we brought back wanted to give us dinner, but the captain would not let us leave the ship, as we were sailing as soon as we could get coal in.

I am sending you an account of the wreck written by myself. I must now draw to a close, as I have no time for more now. I remain, etc., Robbie

Iceberg “glistening in the morning sun like a tombstone”
Printed in this same newspaper, beneath Purvis’s letter, was a small section called “Notes from Carpathia,” which contained more details that Purvis jotted down:

“The Carpathia reached the scene of the disaster at 4 a.m. Everything was still. Lifeboats were scattered about the horizon, crowded with half-frozen, lamenting women and children, whose dear ones had been so ruthlessly snatched from them. A giant iceberg loomed up, glistening in the morning sun like a tombstone. A huge dark patch on the icy water with many bodies mingled with wreckage, marked the spot where the ill-fated Titanic went down.

Want more?
Thanks for stopping by. I invite you to read more of my blog posts if you value intriguing Iowa stories and history, along with Iowa food, agriculture updates, recipes and tips to make you a better communicator. My new non-fiction book, “Iowa’s Lost History on the Titanic,” will be coming out in 2019. In the meantime, click here to get a taste of the fascinating stories you’ll find in this book. 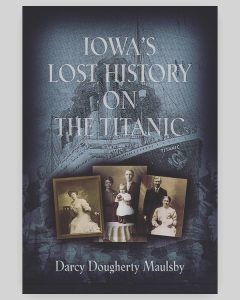 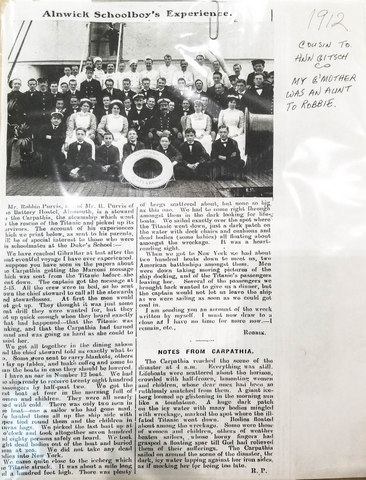