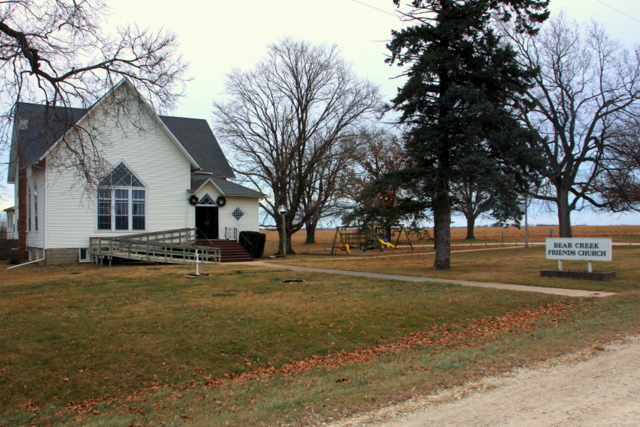 Imagine you’re a fugitive slave on the run in 1850s Iowa. You’ve managed to escape from Missouri and have made it all the way to Dallas County, but your owner and bounty hunters are close behind. If youor the people who are helping you escape on the Underground Railroad—get caught, the consequences are terrifying.

This really happened near the Quaker Divide northeast of Dexter, Iowa, around 160 years ago. It occurred after the federal Fugitive Slave Act of 1850 made it easier for southern slave owners to recovery their property and levied harsher punishments for anyone interfering in the capture of runaway slaves.

I’m going to include the story in my upcoming “Dallas County” book from Arcadia Publishing, which will be released in the summer of 2017. This will be my third book that helps bring Iowa history to life, along with Calhoun County and A Culinary History of Iowa.

Here’s a first-person look into the Underground Railroad in Iowa, as told by those who lived it. This excerpt comes from the “History of the Quaker Divide” by Darius B. Cook, published by the Dexter Sentinel, Dexter, Iowa, 1914. The story of the Underground Railroad documented here was written by Harmon Cook, who shared his personal experiences as one of its conductors:

Running away to freedom
In the days before the Civil War, Dallas County was on the frontier. Slavery was recognized as a product of Missouri. Iowa being a free state naturally proved a highway for the Underground Railroad. John Brown came through the area. The route started from Tabor in Fremont County and crossed diagonally Adair County, striking Summit Grove, where Stuart is now located.

“From there, one line went east down Quaker Divide, and the other crossed the Raccoon River near Redfield, then through Adel. Both lines came together at Des Moines, on to Grinnell to Muscatine and up to Canada. Many times I have seen colored men and women crossing the prairie…slaves running away to freedom.

In the winter of 1859-60, I was going to school to Darius Bowles, and one Friday evening I was told if I wanted to go to Bear Creek, I would not have to walk, if I wanted to drive a carriage and return it Monday morning. I drove the carriage, and in it were two young colored women. They were sisters and from the west border of Missouri. Their master was their father, and they had both been reared in the family.

War was apparent, and their master decided to sell them “down south.” They heard the plotting, and found out that they were to go on the auction block, and made a run for the North Star. They had been on the road seven weeks when they arrived at A.W.L’s at Summit Grove. Before daylight Saturday morning, they were housed at Uncle Martin’s.

You won’t find any slaves here
One Monday afternoon, one of the sisters, Maggie, who had been out in the yard came running in and told grandmother, “Master is coming up the road!” Grandfather went out in the front and sat down in his chair against the side of the door.

By this time, a number of men had ridden up and asked him if he had seen any slaves around. He told them slaves were not known in Iowa.

Then one of them said, “I am told that you are an old Quaker and have been suspected of harboring black folks as they run away to Canada. I have traced two girls across the country, and have reasons to believe they have been here.”

Grandfather said, “I never turn anyone away who wants lodging, but I keep no slaves.”

“Then I’ll come in and see,” said the man, who jumped off his horse and started for the house. Grandfather stood up with his cane in his hand and stepped into the door when the man attempted to enter. Grandfather said, “Has thee a warrant to search my house?”

“Then thee cannot do so,” Grandfather said.

While this parley was going on, and loud words were coming thick and fast, Grandmother came up and said, “Father, if the man wants to look through the house, let him do so. Thee ought to know he won’t find any slaves here.”

Grandfather turned and started at her a minute, then turning to the men, said, “I ask thy forgiveness for speaking so harshly. Thee can go through the house, if Mother says so.”

Grandfather showed him through all the rooms but stayed close to him all the time. After satisfying himself that they were not there, he begged the old man’s forgiveness, mounted his horse and rode away.

When the coast was clear, it was found that when Maggie and rushed in and said, “Master is coming,” Grandmother hastily snatched off the large feather bed, telling both the girls to get in and lie perfectly still. She took the feather bed, spread it all over them, put on the covers and pillows, patted out the wrinkles—and so—no slaves were seen.

Almost caught
One time a big load was being taken down the south side of the Coon River and had reached the timber on the bluffs near Des Moines. About 3 o’clock in the morning as the carriage was leisurely going along, the sound of distant hoofbeats were heard coming behind. At first it was thought the carriage could outrun its pursuers, but prudence forbade.

A narrow road at one side was hastily followed a few rods, and the carriage stopped. The horseman passed on, swearing eternal vengeance on the whole “caboodle,” if captured. When sounds were lost in the distance, a dash was made for the depot in Des Moines, and all safely landed before daylight. 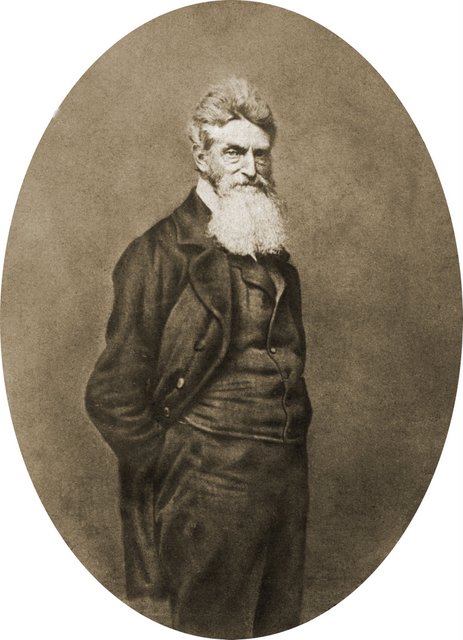 John Brown came to Dallas County
One evening some months after I was returning from Adel on horseback and when opposite Mr. Murry’s farm east of Redfield when I saw Old Man Murry and a stranger back of the barn. I was met by an old man, rather stoop-shouldered and of stern aspect. “Mr. Murry said, “Here’s the youngster who came so near getting caught going to Des Moines.” The stern man with shaggy eyebrows almost in my face said, “Young man, when you are out on the Lord’s business, you must be more discreet. You must always listen backwards, as you are always followed. I’m responsible for that track of the Underground Railroad, and I want my conductors to be more careful in the future, as things are coming to a head, and somebody is going to get hurt.”

I was dismissed with this admonition: “Young man, never do so rash a thing again as to talk and laugh out loud on the way.” A few months later, when Harper’s Ferry was known to fame, I remembered John Brown as the old man at Murry’s.

Editor’s note: In 1859, John Brown led a small group of men who plotted to overthrow the institution of slavery by violent means, starting with a raid on the U.S. arsenal at Harper’s Ferry, West Virginia. Brown intended to incite a slave insurrection. Although he was suppressed by federal forces, Brown became a martyr in the eyes of the Abolitionist movement. Brown’s unsuccessful raid, along with the election of Abraham Lincoln in 1860, led Southern states to believe that they could never survive under an anti-slavery president. South Carolina led the Southern states in secession from the Union in December 1860, followed by Alabama, Mississippi, Georgia, Florida, Louisiana and Texas.

Reconnecting with a fugitive slave
Harmon Cook continued with his memories of the Underground Railroad in Dallas County:

When I enlisted in Company C, 46th Iowa Infantry, and arrived at Memphis, Tennessee, in 1864, I first saw a regiment of colored soldiers. They were in camp and the first opportunity I was over to see how they looked as soldiers. One of the camp scenes was some of the soldiers conducting a school to teach these poor people their ABCs.

Chaplain Ham and I had gone together, and the teacher, who was the lieutenant colonel, asked us to speak to the colored school. When I had spoken, a strapping fellow in blue uniform came rushing up to me, shouting, “I know you! You belong to the Quaker Divide in Iowa. You drove me one night when we were trying to get into town and were followed by our masters, and you drove off into the woods and we got out and hid.”

It was Henry who had been one of the party in that wild midnight ride. He never got to Canada, but stopped in Wisconsin, and when the war came on he enlisted. He was lieutenant of the colored regiment and was a trusted scout for the general of our division.”

Background notes on the Underground Railroad in Dallas County
The Bear Creek Settlement, also known as the “Quaker divide” in southern Dallas County north of Dexter, is located between the South Raccoon River on the north and Bear Creek on the south.

In the early 1850s this area was open prairie without a single settler. But a Quaker family (including Richard Mendenhall and his wife, Elizabeth) from Marion County, Indiana, settled in Dallas County in 1853 in Union Township in what would become the Quaker Divide.

While the Quakers were among the most prominent slave traders during the early days of America, paradoxically, they were also among the first religious denominations to protest slavery. While not all Quakers participated in the organized anti-slavery movement, many did—including many in Iowa.