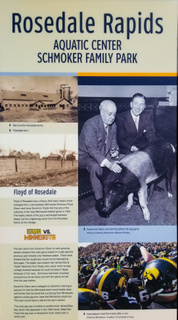 If you follow college football in the Midwest, especially if you’re a University of Iowa Hawkeye football fan, you may know the story of Floyd of Rosedale. A bronze statue of the pig, Floyd of Rosedale, is exchanged between the two states. The original pig himself came from Rosedale Farms at Fort Dodge in north-central Iowa.

The whole deal emerged from a bet between Iowa Governor Clyde Herring and Minnesota Governor Floyd Olson about the outcome of the 1935 Iowa-Minnesota football game, but this story involves something much deeper than a famous pig and a bronze trophy.

The problem started the previous year, on Saturday, October 27, 1934, when rough play was directed towards one Iowa Hawkeye running back, Ozzie Simmons. Simmons was a rarity in that era: a black player on a major college football team. Dubbed the “ebony eel” by some sportswriters of the era, Simmons had come north to play football when he wasn’t allowed to play football in his home state of Texas, due to his race.

America in the 1930s included Jim Crow laws in southern states, which segregated blacks from whites. In northern states, no such laws existed, but discrimination was still widespread.

Simmons’ talent couldn’t be denied, however, and he attracted the attention of a young Iowa sports broadcaster perched high above the field. That broadcaster, who would become President Ronald Reagan, became an Ozzie Simmons fan, noted Minnesota Public Radio (MPR), which aired the story “The Origin of Floyd of Rosedale” in 2005. Reagan described a trademark Simmons’ move during a telephone interview with legendary Iowa sports broadcaster Jim Zabel of WHO Radio in Des Moines.

“Ozzie would come up to a man, and instead of a stiff-arm or sidestep or something, Ozzie — holding the football in one hand — would stick the football out,” Reagan said. “And the defensive man just instinctively would grab at the ball. Ozzie would pull it away from him and go around him.”

There were no dazzling runs against Minnesota, however, in the 1934 game at Iowa. Simmons was knocked out three times, leaving the game for good by halftime. The Gophers overwhelmed Simmons and the rest of the Iowa team, beating them 48-12.

While Minnesota went on to win the national championship that year, Iowa fans at the game were outraged by how Minnesota played, in Iowa City claiming the defense deliberately went after Iowa Simmons hard. (Just 11 years earlier, Iowa State’s first black athlete, Jack Trice, died of injuries sustained in a game at Minnesota in 1923.)

How Floyd of Rosedale was born
In 1935, the Rosedale Trophy debuted in an attempt to generate some goodwill between the two schools. Ahead of the 1935 game, Herring warned Minnesota not to pull the same stunts it did the year before. “If the officials stand for any rough tactics like Minnesota used last year, I’m sure the crowd won’t,” Herring said.

Olson sent a telegram to Governor Herring to assure him that the Minnesota team would tackle clean. To help calm the growing tension ahead of the next Minnesota-Iowa football game, Olson also went on to say that he would bet a prize pig from Minnesota against a prize pig from Iowa that Minnesota would win the big game. The loser would have to deliver the pig in person.

“Dear Clyde,” stated Olson’s telegram to Herring. “Minnesota folks are excited over your statement about the Iowa crowd lynching the Minnesota football team. If you seriously think Iowa has any chance to win, I will bet you a Minnesota prize hog against an Iowa prize hog that Minnesota wins today.”

The Iowa governor accepted, and what became known as the Floyd of Rosedale prize was born. Herring apparently followed Olson’s cue. He joked it would be hard to find a prize hog in Minnesota, since they all were so “scrawny.” 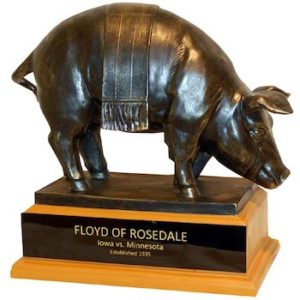 Word of the bet reached Iowa City as the crowd gathered at the stadium. Things calmed down, and the game proceeded without incident. Minnesota won 13-7.

The prize pig from Iowa was a Hampshire boar, black with a white belt. He was later named the Floyd of Rosedale after Minnesota’s governor. In the week following the big game, Herring delivered the live pig to the Minnesota Capitol building in St. Paul and took Floyd inside to meet Olson.

After the hog’s trophy days were over, Floyd spent his remaining days on a farm in southeast Minnesota. Floyd died of hog cholera in July 1936, about eight months after he made the front page. The real Floyd, Governor Olson, passed away less than a month later, dying of cancer in August 1936.

(Ironically, Floyd the hog wasn’t the only celebrity in his family. Floyd of Rosedale was the brother of another famous boar, Blue Boy, who had appeared in the 1933 movie “State Fair.”)

Leaving a legacy
All these years later, the famous Floyd of Rosedale endures as one of college football’s most famous trophies. Floyd of Rosedale’s legacy is also preserved in a marker by the Rosedale Rapids Aquatic Center in Fort Dodge.

Simmons, whose story prompted the Floyd of Rosedale trophy, never took much interest in the trophy, in part because of the era of racial discrimination it recalled. He was denied a chance to play professional football, because the National Football League banned black players at the time, noted MPR. He played some minor league ball, joined the Navy and eventually became a Chicago public school teacher.

“When Ozzie Simmons stepped onto the field in October, 1934, to play Minnesota, he entered a national drama that’s still playing out today,” MPR noted. “All Simmons wanted was a chance. The trophy is an ever-present reminder of how precious that right is.”

Want more stories like this?
These are the kinds of stories I’m sharing in my new book, “Iowa Agriculture: A History of Farming, Family and Food,” which was released by The History Press on Monday, April 27, 2020.  Order your signed copy by clicking here to my online store.

After I posted this story, I received this intriguing email from my friend Victoria Herring of Des Moines:

“You may remember coming to Artisan Gallery 218 to do book talks. I was reading your website about the Floyd of Rosedale story – apparently appearing in an upcoming book. I assume you know there’s a bit more to the story == I think George Mills wrote about it in one of his books == when this happened some guy [whose name I forget but he was a bit of a thorn in the side of some public figures] filed a criminal complaint against Gov. Herring [he was my grandfather] alleging illegal betting — might be an interesting even if a little off topic addition.”

I pulled out a copy of George Mills’ classic book, Looking in Windows: Surprising Stories of Old Des Moines, and saw exactly what Victoria was talking about. In the second called “A Governor Arrested,” Mills explained how a gadfly named Virgil Case in Des Moines got a warrant for Governor Herring’s arrest following the Floyd of Rosedale 1935 bet. The charge? Gambling on a hog wager.

At the time, Iowa law provided a penalty of up to a $100 fine or 30 days in jail for gambling. Municipal Judge J.E. Mershon signed the warrant.

Who was Case and why did he go to all this trouble? He was a “natural-born hell raiser,” wrote Mils, who added that Case had been a secretary to a Des Moines mayor and publisher of a weekly newspaper.

Case explained how he happened to file the charge. He said he had some spare time, and it occurred to him a “good way to put in that time was to go over to Municipal Court and have the governor arrested. So that’s what I did.” He said his profession was “raising hell with public officials because they should be the first to set a good example.”

Word of the warrant reached Herring while he was still with Minnesota Governor Olson in Minneapolis. Herring immediately engaged Olson as his attorney. Olson squelched a suggestion that the pig be auctioned off to pay a possible Herring fine.  “That pig stays in Minnesota, regardless of what happens,” Olson declared. He added that the bet wasn’t a gamble anyway, since Minnesota was a cinch to win the game.

Olson suggested that Herring stay in St. Paul, where he couldn’t be extradited, since the Minnesota governor had to consent to the extradition, and Olson was already Herring’s attorney. Herring observed that only the governor of Iowa could extradite anyone back to Iowa–and he was the governor of Iowa.

“Olson added a sly insult when he said it wasn’t gambling because ‘nothing of value was involved,'” Mills wrote. Herring shot back that Floyd of Rosedale was a “right good hog.”

Walter Brick, deputy municipal court bailiff, cause a stir of excitement at the Iowa statehouse a few days later. When he showed up at Herring’s office, reporters thought maybe he was there to lead the governor away in handcuffs. Nope. Brick just wanted to talk over a planned court hearing on the charge.

The only action the deputy took that day was to join the reporters in eating apples out of Herring’s fruit basket. (“Beside apples, Herring was known at times to shut the door and provide the press with beer and Pella bologna, something no governor has done since,” Mills wrote.)

In the hearing, reporters and others testified that Herring hadn’t committed the so-called offense in Des Moines, that the bet wasn’t complete until Herring and Olson met in Iowa City. Assistant Polk County Attorney C. Edwin Moore, later chief justice of the Iowa Supreme Court, moved that the case be dismissed. Judge Mershon was glad to do so. “The folderol was over,” Mills concluded.

Your message was sent succssfully!
Something went wrong, try refreshing and submitting the form again.
4
0
0