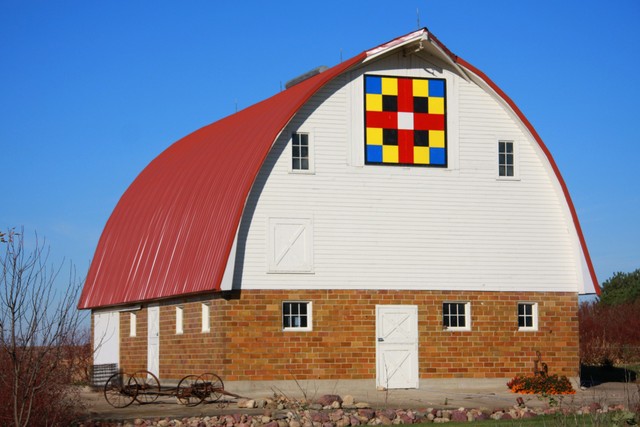 When Alvin (Al) Liske and his wife, Jean, signed up for the Barn Quilts of Sac County project, they had no idea how much attention this would attract to their stately World War II-era barn west of Early, Iowa.

“Our barn has been featured in Eleanor Burns’ book, ‘Quilt Blocks on American Barns,’ and it was also included on the cover of the Department of Transportation’s 2009 map of Iowa,” said Jean.

Burns, a popular television personality who gained famed for her “Quilt in a Day” system, visited the Liske barn last year when she traveled to Iowa to participate in the Sac County Quilt-a-Fair. She was especially intrigued by the Country Lanes barn quilt pattern that graces the barn’s haymow door. She noted that Country Lanes is a very old pattern that was originally published by Mountain Mist, a company that began selling quilt batting in Cincinnati in 1846.

“We chose the Country Lanes block, because we live on a gravel road,” said Jean, who works in the registrar’s office at Buena Vista University in Storm Lake. “Even though we’re off the beaten path, it’s not uncommon to see people drive out here and take photos of the barn.”

Jean’s father, Herman Puetz, built the barn for approximately $4,000 around 1943 or 1944 on the Boyer Valley Township farm that his family had purchased in 1930. The new barn replaced an existing barn that was made from cottonwood lumber. After the concrete foundation for the new barn was poured, lumber was not readily available for the building, due to the war. In the meantime, the family roller skated on the concrete slab. “When construction started again, I can also remember going with my parents to Albert Lea, Minn., to get the rafters for the barn, and I thought that was a really long trip,” said Jean, who noted that the barn includes glazed tile on the bottom and originally had wood shingles on the rounded, gothic roof.

Herman kept horses in the barn, said Jean, who added that farming with horses could be dangerous. “One time when my Uncle George was hauling manure on our farm, something spooked the horses, and they ran toward a barbed wire fence. My uncle jumped off, and he broke his ankle, which got infected.”

Jean’s father, who was one of 12 children, also milked cows on the east side of the barn and kept plenty of hay in the haymow. “I’d play in the barn with my brothers and sister, and we’d make tunnels and caves and houses with the bales. When enough hay had been fed, there would be bare spots in the haymow, and we’d play basketball up there,” said Jean, who noted that the haymow still includes basketball hoops.

After Jean married Al and the couple moved to the farm where Jean grew up, the Liskes raised cattle and hogs in the barn and farmed from the early 1960s until the 1980s. In 2005, the couple decided to remodel the barn, which still had a good foundation. “It was getting to the point where we needed to fix up the barn or think about tearing it down, and we didn’t want to watch the barn fall down,” said Jean, who noted that the family power washed the interior, rebuilt windows and doors, had the barn rewired, covered the roof with red steel and added a staircase to the haymow.

The barn, which is now used for storage, became

a favorite play area for the Liske’s grandchildren. “The barn is an important part of our family’s heritage, and it’s one of the few old buildings left on this farm,” Jean said. “My dad was always proud of the barn, and we’re glad we’ve maintained it.”

Note from Darcy: I first wrote this piece in 2010 for Farm News.