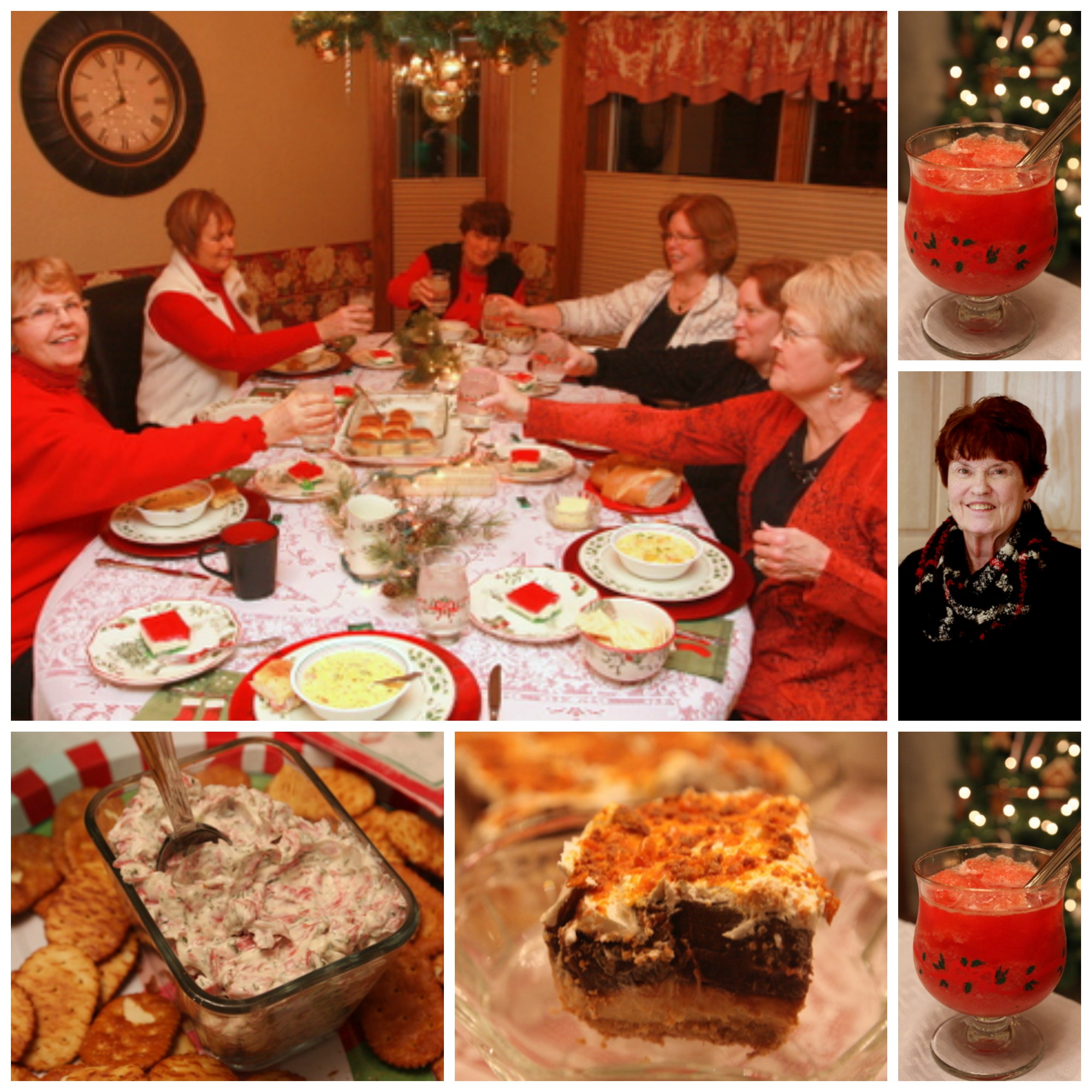 While one of Lake City’s oldest clubs likely wouldn’t have had any farm women for members when the group formed the 1890s, a farm wife (who is also my mom) is now the club’s president and has belonged to the group longer than any other member. 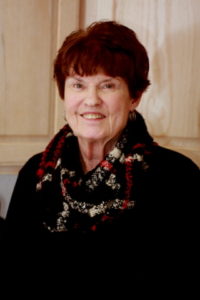 “This was originally a very formal club where the ladies in town served white-tablecloth-style dinners and used their good china and silverware,” said Jan Dougherty of Lake City, president, who joined the Shakespeare Club in 1972. “Now we’re much more relaxed and just like to have fun.”

Part of the fun involves cooking classes, preparing homemade treats for the “lunch” following the meeting and sharing recipes. The group has visited Sweet Things Bakery in Lake City and recently enjoyed a cooking class taught by Robin Qualy of Lake City, who runs La Casa Cuisine and teaches people how to make homemade pasta and more.

“I like the camaraderie and enjoy getting to know people better through Shakespeare Club,” said Pam Feld of Lake City, who joined the group a few years ago.

Organized in 1894, the Shakespeare Club holds the honor of being the second oldest club in Lake City. It was organized by four young women interested in their social and intellectual advancement. Programs were arranged to study the lives and works of famous authors, although the greater part of each year was devoted to the works of Shakespeare. Later, the programs were diversified to include the study of music and the arts, as well as the cultures of Europe and South America.

During World War 1, Shakespeare Club members held benefit teas and auctions to raise money for the Red Cross. In the 1920s, a three-day celebration was held to commemorate the club’s silver anniversary. Parties, picnics, and a presentation of a picture to the library were part of the festivities. “The Shakespeare Club is famous for doing things right,” quoted the Lake City Graphic newspaper in 1923.

Through the years, club members have been instrumental in supporting the progress of schools and the local library, as well as civic improvements. As it has for years, the group continues to meet in members’ homes, and each meeting includes a program or special activity and ends with a luncheon.

“I like meeting in people’s homes,” said Pat Albright of Lake City. “It’s a comfortable feeling where we can be ourselves and enjoy each other’s company.” 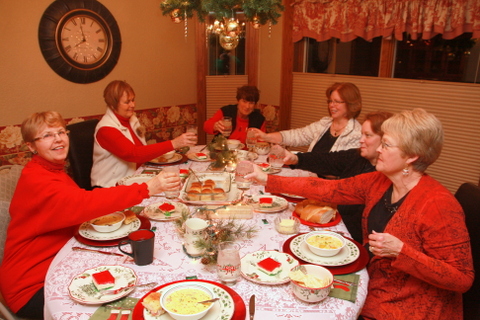 This also appeals to Jan McClue, who hosted the group’s 2016 Christmas party at her home near Lanesboro. “I like that we’re a group for fun, and I enjoy the interesting outings we go on around the area.”

One of the group’s favorite destinations is Studio Fusion in Fort Dodge, where members design their own glass picture frames, dishes, jewelry and more.  No matter where they meet, however, snacks and homemade treats are always on the agenda. “Good food has always been part of Shakespeare Club, and I think it’s neat the club has lasted all these years,” Dougherty said. “Our motto could be, ‘We don’t meet if we don’t eat.’” 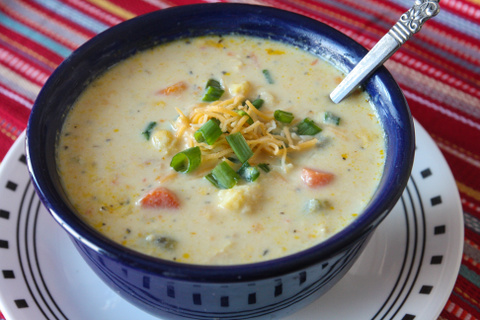 Smoky bacon combines with tender cheese tortellini for a creamy and comforting take on the usual corn chowder, which is one of my favorite soup recipes. I served it at the Shakespeare Club’s 2016 Christmas party at Jan McClue’s home near Lanesboro.

Set a Dutch oven over medium heat. Add the bacon. Cook for 1 minute, or until it releases some of its moisture. Add the onion, celery, and bell peppers. Cook for 5 minutes, or until the vegetables are soft. Add the corn, broth and carrots. Bring to a boil over high heat. Reduce the heat to medium. Simmer for 15 minutes.

Place the flour in a medium bowl. Gradually add the milk, whisking until smooth. Pour mixture into the Dutch oven. Stir until well-blended. Add the basil, salt and pepper. Cook, stirring occasionally, for 3 minutes, or until the soup thickens. Add the tortellini, green beans and ham, if desired. Cook for 2 minutes, or until heated through. 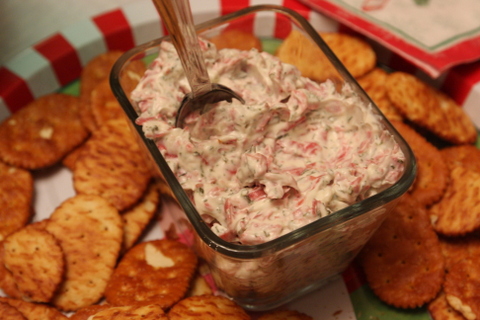 Beef Dill Dip
This tasty dip from Jan McClue is simple to make and can be served with bagel wedges or crackers.

Mix all ingredients together. Serve with crackers or bagel wedges.

Combine all ingredients. Bake at 350 degrees, or until top of the dip lightly browns. 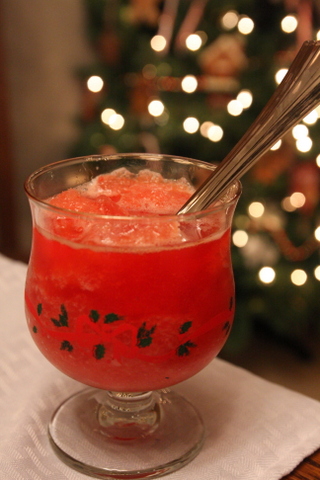 Celebration Slush
This simple slush from Jan McClue, a Shakespeare Club member who lives on a farm near Lanesboro, makes any party more festive.

Combine all ingredients and freeze in a plastic container, like an ice cream bucket. To serve, add a splash of lemon-lime soda pop, raspberry vodka or strawberry daiquiri.

Taco Soup
This flavorful soup from Marie Schwarm of Lake City is sure to please on a cold winter day.

1 pound of ground beef (cooked and drained)
1 can of corn 1 can great northern beans
1 can black beans
1 can red beans
1 medium size can of diced tomatoes
1 packet of Hidden Valley dressing mix
1 packet of taco seasoning
1 cup of water
Tortilla chips
Sour cream
Shredded cheese
Combine all ingredients in crockpot (do not drain the beans) except tortilla chips, sour cream and cheese.  Cook on low for 6 to 8 hours. Serve with chips, sour cream and cheese. To spice up the soup, add a small can of diced green peppers.

Make a bed of fresh spinach or chopped lettuce on plate. Top with chopped tomatoes and chili beans that have been heated. Top with crushed corn chips. 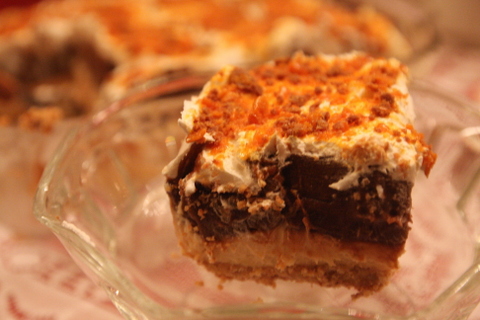 This luscious, rich dessert is a sweet symphony of creamy goodness.

Cream cashews, flour and butter together. Press mixture into baking pan. Bake at 350 degrees for 25 to 28 minutes.

Combine milk and the two pudding mixes. Chill in refrigerator. When set, layer mixture on top of peanut butter layer.