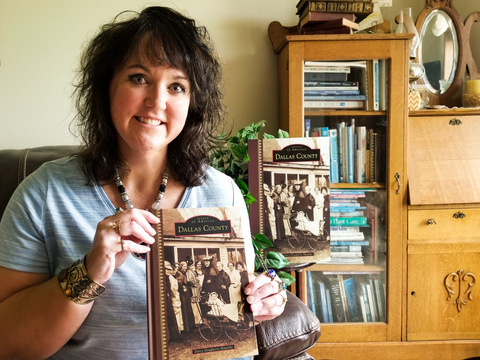 The Hotel Pattee and I are Hosting a Party—And You’re Invited!

What are you doing on Monday evening, Sept. 11? I would like to personally invite you to Perry to the historic Hotel Pattee at 7 p.m. for the debut of Dallas County, my latest non-fiction Iowa history book. It’s all here—drama, crime (Bonnie and Clyde), politics (Dallas County made President Harry Truman the original Comeback Kid), romance, tragedy, mystery, action, adventure, sports, food, agriculture, architecture, science, business, biography, comics and more—all told through more than 100 vintage photos and short stories in 10 chapters.

During this fun event at the hotel (click here for all the details!), I’ll take you on a time-traveling virtual tour of fun, surprising and sometimes shocking Dallas County history highlights. Stick around for the book signing after the program, and then stroll through the iconic Hotel Pattee to tour some of the guest rooms that will be open that evening. Every room in this grand boutique hotel features unique décor that tells the stories of Perry, Dallas County and Iowa history.

I’ve specifically asked that the luxurious Louis Armstrong Suite be open that evening. (In case you’re wondering about the Iowa connection, Louis Armstrong performed in Dallas County in 1954 at the legendary Lake Robbins Ballroom near Woodward and stayed at the Hotel Pattee.)

If nothing else, stop by on Sept. 11 for the homemade cookies the Hotel Pattee’s culinary team is preparing with some of my favorite recipes! 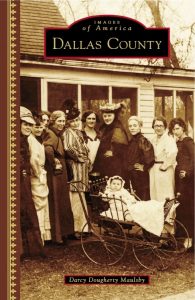 Explore forgotten Iowa history
I am so excited to bring you this new hardcover, illustrated book, which is the first in-depth, non-fiction history of Dallas County, Iowa, in nearly 80 years!

No Iowa county has influenced American history more than Dallas County. It propelled Harry Truman to an unlikely victory in the 1948 presidential campaign, following a fiery speech he delivered to 100,000 farmers on a sweltering September day at the National Plowing Match near Dexter. Just 15 years earlier, a shoot-out near Dexfield Park marked the beginning of the end for infamous outlaws Bonnie and Clyde and the notorious Barrow Gang.

Dallas County, located just west of Des Moines, has produced several major-league baseball players (among them Bob Feller and Hal Manders), a US congressman (David Young), and Nile Kinnick, the 1939 Heisman Trophy winner and University of Iowa football legend whose grandfather George Clarke, of Adel, served as Iowa’s governor from 1913 to 1917.
Today, Dallas County is one of the fastest-growing counties in America and remains a region of opportunity with a rich heritage of small-town living, farming, coal mining, and the immigrant experience.

Here’s a quick list of highlights that make this Dallas County book unique:

1. Many of the images have been donated from private collections.

2. In the early 20th century, Dallas County was one of the biggest coal-mining areas of Iowa. Much of this history, from Waukee to Woodward, is shared in this new Dallas County book. You can also get the inside story in this guest blog post I wrote for Hometown Heritage in Perry.

3. At least two circuses once made Dallas County their home base, including the famous Orton Bros. three-ring circus, where Five generations of the Orton family thrilled audiences for years. The Yankee Robinson Show, a Midwestern traveling circus, made its winter quarters two miles southeast of Granger. The spacious area also provided a place to bury deceased circus elephants. Granger may be the only Iowa town to claim an elephant graveyard.

4. Minburn’s legendary Singing Wheels roller skating show debuted in 1950 and ran through the early 1960s. Local children, high school students from the Minburn Roller Club and adults all participated in the Singing Wheels’ summer performances, which included a new theme every year, eye-catching costumes, and choreographed routines. These shows attracted thousands of people to the Minburn roller skating rink.

5. The Lake Robbins Ballroom, which opened on November 11, 1931, near Woodward, is still a popular entertainment destination and is one of the few remaining ballrooms in Iowa. The legendary Louis Armstrong performed at Lake Robbins in 1954 and stayed at the Hotel Pattee in Perry, where the most luxurious suite in the hotel is named in his honor.

6. Granger became the focal point of a successful New Deal program inspired by Monsignor Luigi Ligutti, who had served Assumption Church in Granger since 1926. Ligutti felt coal camps were an unsuitable environment for children and looked to the land to address the miners’ economic and social challenges. The 225-acre Granger Homesteads, built in 1935, included 50 modern homes, along with approximately four acres each for raising crops and livestock. In 1936, First Lady Eleanor Roosevelt visited the Granger Homesteads and praised the success of the project.

8. Dallas County is one of the fastest-growing counties in America and remains a region of opportunity with a rich heritage of small-town living, farming, coal mining, and the immigrant experience. 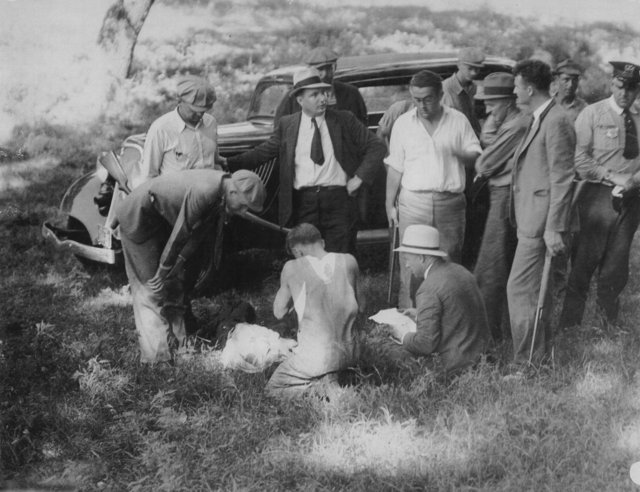 While Bonnie and Clyde escaped, Clyde’s older brother, Buck Barrow (shown lying on the ground), was mortally wounded during a shootout with law enforcement during the early morning hours of July 24, 1933, near Dexfield Park in southern Dallas County. Buck would die a few days later at Kings Daughters Hospital in Perry. Source: Dexter Museum

Want more?
Thanks for stopping by.  I invite you to read more of my blog posts if you want more more intriguing Iowa stories and history, along with Iowa food, recipes and tips to make you a better communicator.

2 responses to “The Hotel Pattee and I are Hosting a Party—And You’re Invited!”