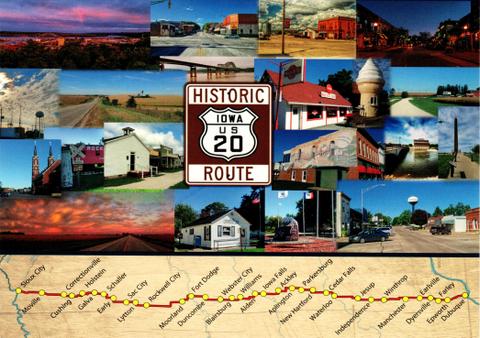 It’s Time to Be 20 Again: Take a Road Trip on Historic Highway 20

It’s a quest that’s decades in the making. When hundreds of people gathered in Holstein on October 19, 2018, for a ribbon-cutting celebrating the completion of U.S. Highway 20 as a four-lane thoroughfare across Iowa, the focus on the future was intertwined with the history of this remarkable road–which offers the perfect route for a road trip.

“Highway 20 is the longest highway in America, spanning 3,365 miles from Boston, Massachusetts, to Newport, Oregon,” said Bryan Farr, founder and president of non-profit Historic US Route 20 Association, which promotes travel along the original 1926 alignment of US Route 20. “Modern travelers aren’t always aware of Highway 20. We want to make it a tourist destination like Route 66.”

But first things first—is 20 a highway or a route?

“It depends on where you’re from,” said Farr, who grew up in the Finger Lakes region of New York state and now lives in Chester, Massachusetts. “If you’re from Massachusetts, New York or Pennsylvania, you pronounce it ‘Root’ 20. If you’re from Ohio, Indiana or Illinois you say, ‘Route 20.’ If you’re west of the Mississippi River, it’s Highway 20.” 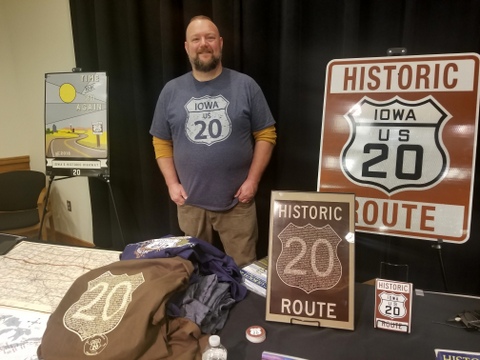 Bryan Farr is the founder and president of non-profit Historic US Route 20 Association, which promotes travel along the original 1926 alignment of US Route 20.

History happened here
The remarkable history of Highway 20 started with the passing of the Federal Highway Act of 1921, which appropriated $75 million for road construction throughout the country. The roads that would become Highway 20 were officially designated during the summer of 1925, with the original alignment of the highway taking shape in 1926.

Creating the modern, efficient, paved, four-lane highway travelers enjoy across Iowa today, however, took decades to create, Farr said. The road was often re-aligned throughout its history, and much of it was gravel for part of the highway’s history. “There are still little sections of the 1926 alignment of Highway 20 outside of Early and Fort Dodge that still are gravel,” Farr noted.

Speaking of Fort Dodge, this Highway 20 city has an unforgettable connection to Cardiff, New York, another Highway 20 town where one of the greatest hoaxes of the nineteenth century took place.

It all started when Stubb Newell of Cardiff, New York, needed a new well. On Oct. 16, 1869, Newell directed two well diggers to a spot he selected behind his barn. The men dug 3 feet and hit something solid. They uncovered a huge stone foot. As they dug more, an entire body of a man emerged. Two days later, a large tent was placed over the 10-foot stone man and crowds of nearly 200 to 500 people a day paid 50 cents to see this giant. Scientists, philosophers and the clergy attended and were challenged in their beliefs, noted the Historic US Route 20 Association website.

Legendary showman P.T. Barnum offered $60,000 for the giant but was turned down. Soon, however, the hoax came to light when people recalled a man named George Hull (a cousin of Newell) had visited a gypsum mine at Fort Dodge in 1868. He commissioned a 5-ton block to be used to carve a statue of Abraham Lincoln. The block of gypsum was shipped to Chicago and carved into this giant man. The carving’s surface was treated with acids and picked at with needles to give it an antiquated look. It was then shipped and buried in New York.

Today, the giant rests at the Farmers’ Museum in Cooperstown, New York. In 1969, a replica was created from the same gypsum quarry and is on display at the Fort Museum in Fort Dodge.
These types of stories offer a unique perspective of Highway 20, which Farr has traveled from coast to coast. “I want to bring people back into small town America, to shop locally and support local businesses to boost economic development in communities that may be bypassed by interstate highways or other more popular routes.”

Gaining a new perspective of Highway 20
Highway 20 is also distinguished by a number of other noteworthy distinctions, including:

• A connection to five presidents. “Highway 20 is a presidential route,” said Farr, citing George Washington as well as Abraham Lincoln, whose famous debates with political rival Stephen Douglas took place in Freeport, Illinois. Highway 20 is also connected Galena, Illinois, where President Ulysses S. Grant had a home. In northern Ohio, Highway 20 passes through Freemont, home of President Rutherford B. Hayes, who served from 1877 to 1881, oversaw the end of Reconstruction and attempted to reconcile the divisions left from the Civil War. Cleveland, Ohio, honors President James Garfield, who was elected president in 1881 but whose service was cut short after 200 days in office when he was assassinated and later died on September 19, 1881.

• The women’s movement organized along the future Highway 20. The Seneca Falls Convention was the first women’s rights convention in the United States. Held in July 1848 in Seneca Falls, New York, the meeting launched the women’s suffrage movement, which more than seven decades later ensured women the right to vote.

• Highway 20 name is more than just name. In 1925, a system of numbered highways debuted in America to replace the jumbled, confusing mess of named auto trails. “Routes with a zero at the end, like Route 20, were transcontinental routes,” said Farr, author of the book “Historic Route 20: A Journey Across America’s Longest Highway.” “Also, east-west routes have even numbers, while north-south routes have odd numbers.”

• Iowa attractions abound along Highway 20. Spanning roughly 330 miles across Iowa from Dubuque to Sioux City, Highway 20 offers plenty to see and do, Farr said. A few options include Dyersville, home of the famous Field of Dreams movie site, the National Farm Toy Museum and the Basilica of St. Francis Xavier; Independence, home of the Heartland Acres Agribition Center, which connects visitors to the past, present and future of Iowa agriculture; Sac County, with its famous barn quilt trail and world’s largest popcorn ball in Sac City and Sioux City, with its rich history related to the journey of the Lewis and Clark expedition nearly 250 years ago. 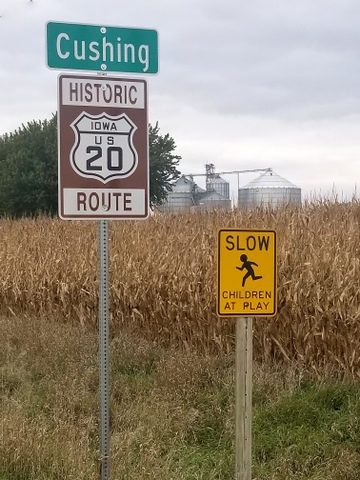 While the first Historic Route 20 sign was placed in Painesville, Ohio, in 2014, Cushing became the first Iowa community to display one of the distinctive signs. This sign greets visitors as they enter the small Woodbury County town from the east on the old route of Highway 20.

It’s interesting to note that bypasses started being built along Highway 20 almost from the start, starting in Massachusetts in the late 1920s. By the 1950s, bypasses in Iowa rerouted Highway 20 out of Farley in eastern Iowa. The trend hasn’t stopped since then. In recent years, communities along historic Highway 20 have been installing signs to denote their unique place along the route. While the first Historic Route 20 sign was placed in Painesville, Ohio, in 2014, Cushing became the first Iowa community to display one of the distinctive signs. This sign greets visitors as they enter the small Woodbury County town from the east on the old route of Highway 20.

While efficient transportation has its place, Farr encourages travelers venture off the interstates and four-lane Highway 20, explore the nearby towns and rural areas and see some the best of America. “Highway 20 is like a companion,” said Farr, who is promoting the new slogan “It’s time to be 20 again.” “This road will take you home.”

Your message was sent succssfully!
Something went wrong, try refreshing and submitting the form again.
6
1
1