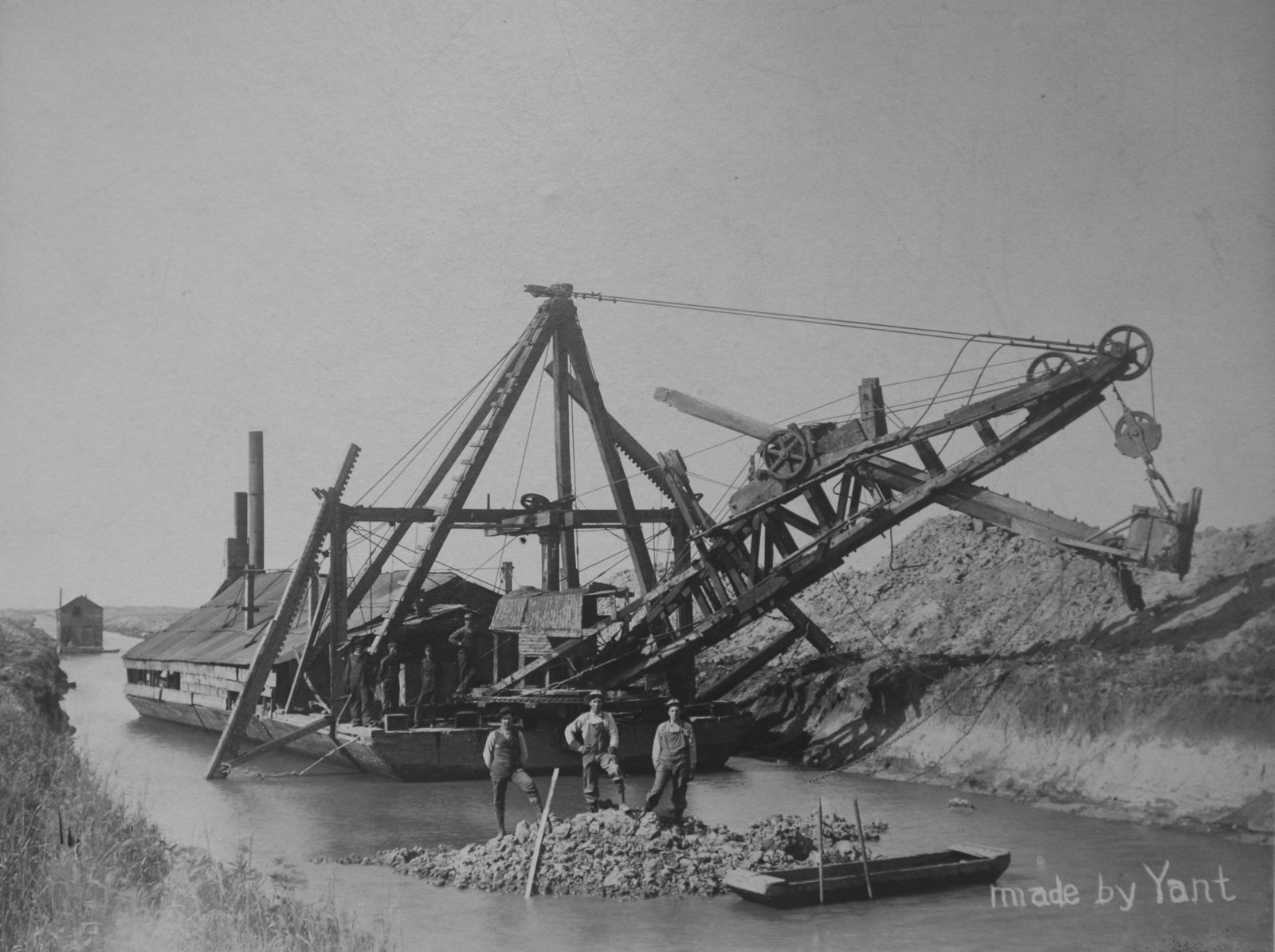 If there were a “Mysteries at the Museum” television series geared towards agriculture, this item would be ideal to lead in a segment. It’s hollow, it’s made of clay, it contains a message from the past, and it was buried in the ground for decades.

It’s a unique clay drainage tile dated 1885, and it’s on display in the Greene County Historical Society’s museum in Jefferson. The message carved around the exterior of the tile reads, “We the men who started the tile work did so with a motive to benefit the town and country. Signed T.P. LaRue of Scranton, Iowa.”

An interpretive sign by the tile shares a quote from S.J. Melson, a former Greene County engineer, to explain the curious item’s history. “This tile was placed into my hands by Carl Paup on February 1968. Mr. Paup stated the tile was unearthed and has lasted for many years on the property owned and operated by Harrison Paup of Kendrick Township, Greene County, Iowa.”

That tile reflects a major part of Iowa’s agricultural history that has been buried, literally, for generations, yet this history continues to influence farming methods, especially in the prairie pothole regions of north-central Iowa and northwest Iowa.

“In general, ag drainage in Iowa got its start around 1880, but this varied a lot, depending on the region,” said Joe Otto, a historian and Ph.D. candidate at the University of Oklahoma who works as a communications specialist with the Iowa Water Center at Iowa State University.

The first documented case of a drain tile being installed in Iowa occurred in 1868 on the grounds of Iowa State in Ames, Otto added. Before that, some of the first drainage ditches were dug in the 1850s along the Mississippi River in Des Moines County, just upstream from Burlington, so farmers could help protect themselves from flooding. One of these farmers, John Williams, was later elected to the state legislature and helped get the state’s first drainage laws passed in the 1870s, Otto said.

Drainage affected Iowa’s settlement patterns
Ag drainage was such a major issue in the 1800s that it impacted Iowa’s settlement. “Iowa wasn’t settled east to west, but from the bottoms up to the top of the state’s many river valleys,” Otto said. “Atop the river valleys were the flat, glaciated prairies of north-central and northwestern Iowa. These were settled and farmed starting in the 1870s and 1880s – several decades after farming started along the Mississippi.” 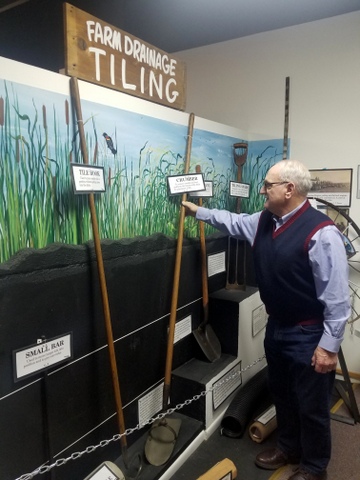 The region’s extensive swamps and sloughs were remnants of the last glacier, which loosened its icy grip on Iowa approximately 12,000 years ago. “There was a lot of water and nowhere for it to go,” Otto said. “Drainage ditches had to be dug and tile lines had to be laid before the sloughs and swamps of Iowa could be farmed. This started around 1880 and picked up speed in the early 1900s as drainage technology became more advanced.”

Ag leaders like Civil War veteran and pioneer farmer Jesse Allee, who settled in the Newell area in 1871, knew ag drainage would be essential to the development and prosperity of the region. “He was far-seeing with the unshakable belief in the future of the community’s farm land,” stated the 1969 Newell centennial history book on display at the Allee Mansion south of Newell. “Jesse worked hard educating the public to the necessity of proper drainage if this area was to be a leader in agriculture.”

in Jefferson before he passed away in 2014.

As more settlers moved into Iowa and demand for tile drainage grew, tile kilns and factories popped up across the state, Otto noted. Greene County, like many Iowa counties, had multiple firms manufacturing clay tile. These businesses used locally-sourced clay, including the Jefferson Cement Products Co., which was located just north of the Greene County Fairgrounds and operated until about 1930, and Lawton and Mass, which produced concrete tile at Cooper for a number of years, starting in 1895.

“There were also small machines made for farmers to mix concrete and scoop it into a manually-cranked device that used metal forms to make various sizes of tile,” wrote Andrew, who was known as “Mr. History.” “They advertised you could make your tile at home for half the cost of commercial tile. But it’s doubtful if this was very successful, since the proper steaming and curing of concrete tiles is important.”

Drainage districts take shape
Ag drainage in Iowa took a major leap forward in 1904, when state legislation provided for the formation of drainage districts. “Farmers could always drain their own lands if they wanted to, but to truly manage drained water meant cooperation with your neighbors,” Otto said.

A group of farmers could petition for a drainage district. An engineer would survey the land to establish the boundaries of the area, and a feasible drainage plan would be developed.

If approved, a contract would be drawn up, with the cost paid by assessing each landowner for his or her fair share, considering his needs and the acres involved. The county acted as the administrator of the drainage district and assessed taxes against the land, as needed, to pay for the initial cost and later for the maintenance of the drainage district. Many times, the money would be borrowed by issuing bonds, and the landowners would make payments on a 10-year plan, Andrew noted.

“The drainage district plan provided the larger tile needed for the main arteries of the system,” Andrew wrote. “Individual landowners were responsible for installing and paying for the lateral tile lines installed on their respective farms to complete the drainage plan.”

From 1904 to 1919, an average of 10 new drainage districts were created per year in Greene County. “That’s a new district about every five weeks,” Andrew wrote.

The 1910s became the golden age of ag drainage when most of Iowa’s public drainage systems were built, Otto added. “By 1912, Iowa’s farmers had spent more money on drainage then the U.S. government spent to build the Panama Canal.” 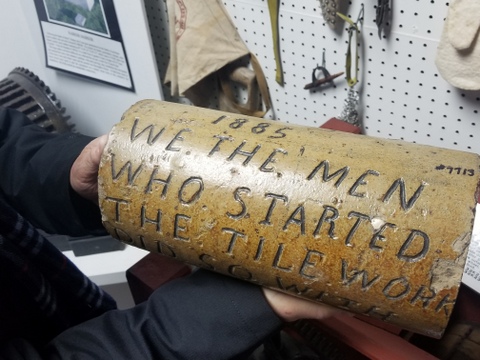 This unique clay ag drainage tile dated 1885 is on display in the Greene County Historical Society’s museum in Jefferson. The message carved around the exterior of the tile reads, “We the men who started the tile work did so with a motive to benefit the town and country. Signed T.P. LaRue of Scranton, Iowa.”

Recalling the life of a ditch digger
By 1920, the formation of ag drainage districts in Iowa slowed down as the post-World War 1 ag depression hit rural America. Still, the work continued.

“Steam power (and later gasoline) engines moved steel and iron machines that could move a lot more dirt around than could horse-drawn scrapers and plows,” Otto said.

Around 1923, after most Greene County drainage districts were in place, the first tiling machines started to be used, although hand digging continued for many years, Andrew noted. In the spring, summer and fall, men could find a job “in the ditch” if they wanted to work. “Many immigrants coming to the USA found their first jobs digging canals, and later drainage ditches. You didn’t have to know English to be a good man in the ditch,” added Andrew, who noted that many of these workers were from Sweden and Ireland.

The early tilers typically lived in tents or small, portable shacks next to the wet land they were draining. They often cooked their own meals and lived off the land by catching frogs for fried frogs’ legs and snapping turtles for turtle soup. They shot ducks, geese and rabbits for meat. Sometimes bullheads and other fish could be caught in the larger ponds, Andrew noted. For water, including drinking water, the men would take a post auger and dig a hole 3 to 4 feet deep and would set in an old farm pump.

“Ditch digging was well organized, and the men were paid by the rods of ditch dug by each man,” Andrew wrote. “No work—no pay. And of course, workmen’s compensation, health insurance and so on were unheard of.”

“Generous gifts”
By the 1970s, corrugated plastic pipe was introduced, which gradually phased out clay tile as the most efficient way to drain land. Today, Greene County has nearly 3,000 miles of drainage district tile and pipes, ranging from 4 inches to 48 inches in diameter. This distance would roughly equal a tile ditch spanning from New York to San Francisco.

“Note that the 3,000 miles is just a measure of the district tiles,” Fields said. “That number would be exponentially larger if you included private tile lines.”

As ag drainage issues have increasingly become intertwined with debates about conservation and water quality, it’s important to keep the line of communication open, Otto said.

“I think the harsh reaction against ag drainage that’s happened in the past few years is due in part to people suddenly wanting to engage in drainage matters, but unsure of what drainage is and does, who administers it and what powers they have. On the other side of the coin, the people trusted to manage the public’s interests in drainage have a responsibility to break down barriers, explain misconceptions and guide the conversation to a common ground.”

That’s a big reason why Andrew documented the history of ag tiling, counting it as one of the most important events in local history and the settlement of the region, noted his son, Jim Andrew of Jefferson.

“Think of the men and the effort it took to dig the clay, form and cure the tile, haul the tile to the jobsite, the survey crews working in ponds and swamps, the drainage plans made by the drainage engineer proving drainage was practical, the legal problems of objections and disputes, letting the bids, and, most important, the hundreds of men with strong backs who worked digging the ditches, laying the tile and filling the ditches,” wrote James H. Andrew.

“Yet, the tile is hidden underground, and the ‘Iron Men’ tilers are all deceased,” he concluded. “As time passes, there is little appreciation for the cooperative efforts that drained Greene County and made it so productive. Only when these old tile systems fail and have to be replaced at great expense will many people realize the generous gifts we’ve received from the drainage district system.”

Your message was sent succssfully!
Something went wrong, try refreshing and submitting the form again.
16
5
2