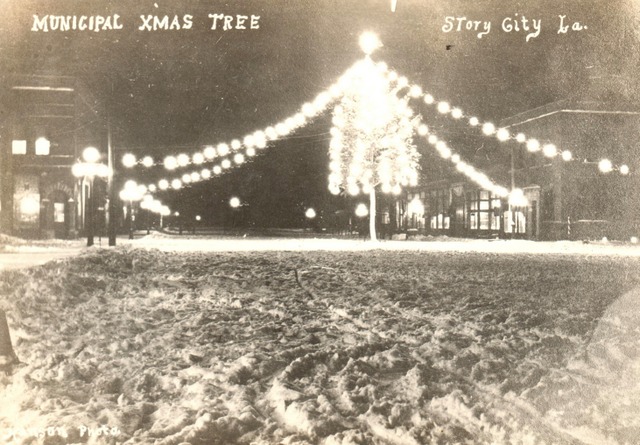 O, Christmas Tree! Small Iowa Towns Celebrate with Trees in the Middle of the Street

For a select group of small Iowa towns, it just wouldn’t be Christmas without a lighted tree downtown—right in the middle in the street. In Story City, the community has celebrated this beloved holiday custom for more than 100 years.

“I’m not surprised this tradition has lasted all these years,” said Kate Feil, director of the Story City Historical Society. “Keeping traditions alive are a big part of Story City, from the annual Scandinavian Days Festival to the municipal Christmas tree.”

This year’s evergreen tree was donated by Ole and Jackie Skaar of Story City and was installed by the Municipal Electric Company at the corner of Broad Street and Pennsylvania Avenue. Hundreds of people attended the Yulefest tree lighting ceremony on the evening of Nov. 25. Excitement intensified during countdown from 10 to 1 before the lights were flipped on. Then the high school choir led the singing of Christmas carols, and guests could warm up with cups of hot chocolate. The Story City Fire Department hosted their annual chili supper following the tree lighting ceremony.

“Families plan their Thanksgiving gatherings each year so they can attend the tree lighting ceremony,” said Abby Huff, executive director at Story City Greater Chamber Connection. “It’s a tradition we hope to carry on for many more years to come.” 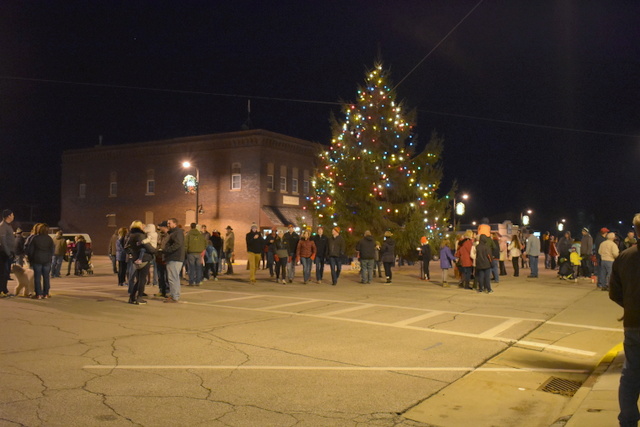 Hundreds of people attended the Yulefest tree lighting ceremony in Story City, Iowa, on the evening of Nov. 25. Excitement intensified during countdown from 10 to 1 before the lights were flipped on. Then the high school choir led the singing of Christmas carols, and guests could warm up with cups of hot chocolate.

Let there be light

In 1914, Story City became one of the first towns in Iowa to display a municipal Christmas tree with electric lights. While many Iowa communities had begun to offer electrical service in the late 1890s and early 1900s, electricity was still a novelty that held the power to fascinate, especially in rural areas.

At that time, electricity was out of reach for thousands of farm families, many of whom wouldn’t receive electrical service until the federal Rural Electrification Act of 1936 brought power to rural America in the late 1930s and into the 1940s.

When Story City harvested its first municipal Christmas tree in town in 1914, local citizens decorated the tree with large, multi-colored lights. The lighting of the tree became a memorable event for a town that had not fully integrated electricity into all homes. A man who was visiting Story City during the Christmas season in 1914 described the tree as “the biggest stunt the town ever pulled off.”

Other communities took note. After Story City celebrated its first lighted Christmas tree, the event attracted newspaper coverage across the Midwest, and the concept of municipal Christmas trees started gaining popularity in small towns across Iowa and beyond.

Nothing caused more consternation, however, than a decision in 1948 to place a decorative Santa and sleigh with four horses from the town’s iconic carousel at intersection of Broad Street and Pennsylvania Avenue instead of a tree. It didn’t go over well, Feil said. “People like the tree.”

Today, many community members, including Mayor Mike Jensen, have helped make sure Story City has a municipal Christmas tree each year. Since it can be a little difficult to find trees that are right for the municipal tree, community leaders have begun planting evergreens near the soccer fields in the northwest part of Story City, said Huff, who noted that Story City is a member of Trees Forever. These trees will help ensure this beloved tradition lives on.

“From the first tree in 1914 to our current tree, I love the feeling of community our municipal Christmas tree continues to bring each year,” Feil said. 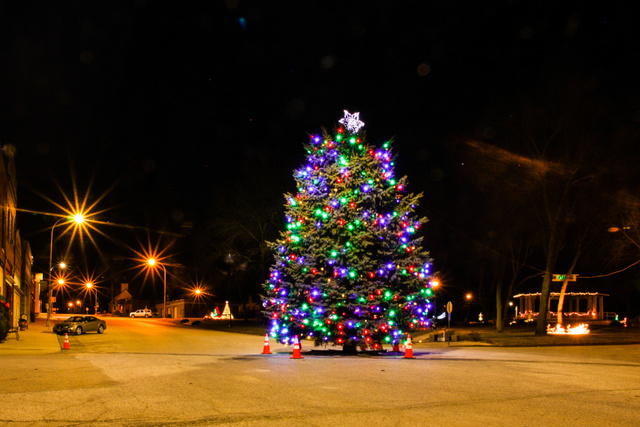 The municipal Christmas tree is unique feature of Exira, Iowa, population 840, which is also known for its 4th of July celebration. “It’s a proud tradition we want to keep around for years to come,” says the city clerk.

On the other side of the state in Exira, population 840, local residents also cherish the tradition of a municipal Christmas tree that stands tall in an intersection downtown near the town square.

“We’ve had a tree each Christmas for many years,” said Lexi Christensen, Exira’s city clerk. “A lot of people compliment us on this tradition.”

This year’s tree, which was donated by Lana Wiges of Hamlin, was set up the Saturday after Thanksgiving. The tree was officially lit when Santa Claus came to town during the first weekend in December. Has anyone ever crashed into the holiday icon? “Fortunately not,” Christensen said.

As part of the tree lighting celebration, guests enjoyed soup and homemade treats at the local recreation center, while the Exira Community Club collected food and toys to donate to local families in need. “The Christmas tree is unique feature of Exira,” said Christensen, who added that Exira is also known for its 4th of July celebration. “It’s a proud tradition we want to keep around for years to come.”

Municipal Christmas trees used to be a much more common sight in small Iowa towns, but the tradition faded away in many communities due to the work involved, declining populations and other factors. To Tammy Maaff-Portz, it was a tradition worth reviving in her hometown of Remsen, population 1,663.

“I’d say the tradition had died out by the mid-1960s, but a group of us wanted to bring back an old-fashioned Christmas with a tree in the middle of the road. We made it happen in 2003 and have been carrying on this tradition ever since.”

This year’s municipal Christmas tree stands about 30 feet tall on Main Street and is covered with an array of oversized green and red ornaments and approximately 3,000 lights, including a lighted star on top. The massive tree sits in a permanent hole dug into the street downtown and is held in place with a support system designed for this purpose. The hole in the street is covered with a steel plate the rest of the year.

The lighting of the municipal Christmas tree, which took place the first Monday evening in December, started with a blessing of the tree by local religious leaders. Then Santa arrived on a vintage fire truck and lit the tree before heading to the Remsen Heritage Museum, where children could share their wish list with him and receive a candy cane.

Remsen’s businesses stayed open that evening until about 8 p.m. Carolers walked from shop to shop, singing songs of the season, while visitors enjoyed horse-drawn wagon rides as sleigh bells rang throughout Main Street. Children took advantage of Kids’ Korner, where they could shop for gifts for their family and either wrap the presents themselves or get a little help from the business owners.

“Living windows” in local stores have also become a popular part of the celebration. This year, members of the St. Mary’s boys’ basketball team were at Schorg’s Custom Cabinetry, where visitors could visit with them while decorating their own Christmas cookies.

“All these events are free and open to the public,” said Maaff-Portz, who owns Furnishings on Second At Muller’s. “People of all ages love it.”

Remsen’s municipal Christmas tree stays lit all through the night, every night, until the tree is taken down during the first few weeks of January. Maaff-Portz is already looking forward to a gala event in a few years to celebrate the 15th anniversary of the municipal Christmas tree’s triumphant return to Remsen. “It’s definitely a community effort. We want to make this a family and community tradition as long as we can.”

The modern Christmas tree is believed to have originated in Germany in the 16th century. Here are some other Christmas tree facts from the Iowa Department of Agriculture and Land Stewardship:

Your message was sent succssfully!
Something went wrong, try refreshing and submitting the form again.
5
2
0